The Perth Courier
By Gena Gibson 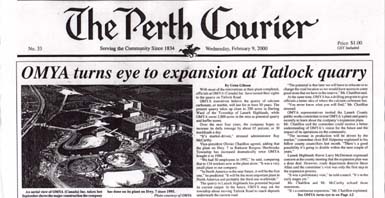 With most of the renovations at their plant completed, officials at OMYA (Canada) Inc. have turned their sights to the quarry on Tatlock Road.

OMYA executives believe the quarry of calcium carbonate, or marble, will last for at least 50 years. The present quarry takes up close to 200 acres in Darling Ward of the Township of Lanark Highlands, while OMYA owns 2,000 acres in the area as potential quarry and buffer zones.

Over the next four years, the company hopes to increase its daily tonnage by about 65 percent, or 30 truckloads a day.
"It's market-driven," stressed administrator Ray McCarthy.

Vice-President Olivier Chatillon agreed, adding that the plant on Hwy. 7 in Bathurst Burgess Sherbrooke Township has increased dramatically since OMYA bought it in 1988.

The quarry in Lanark Highlands has potential beyond its current output. In the future, OMYA may ask the township about moving Tatlock Road to reach deposits underneath the current road.

"The potential is that later we will have to relocate or to change the road location so we would have access to some good stone that we have in the reserve," Mr. Chatillon said.

At the same time, OMYA has a drilling program to give officials a better idea of where the calcium carbonate lies.
"You never know what you will find," Mr. Chatillon stressed.

OMYA representatives invitred the Lanark County public works committee to tour OMYA's plant and quarry recently to learn about the company's expansion plans. Mr. Chatillon said the committee could receive a better understanding of OMYA's vision for the future and the impact of its operations on the community.

"The increase in production will be driven by the market," committee chair Bill Halpenny explained to his fellow county councillors last month. "There's a good possibility it's going to double within the next couple of years."

Lanark Highlands Reeve Larry McDermott expressed concern at the county meeting that the expansion plan was a done deal. However, roads department director Steve Allan said the committee's visit was only the first step in the expansion process.

"It was a preliminary visit," he told council. "It's in the early stages yet."

"It's a continuous expansion," Mr. Chatillon explained. "We have to meet our need on the plant level to meet sales demand…but there is no major step that we can foresee today."

In the next few months, OMYA plans to commission a traffic study on Cty. Rd. 511 to learn how the number of Tomlinson trucks, which carry the marble to the plant, compares to other trucks on the road.

At the county council meeting, Mississippi Mills Councillor John Edwards questioned the technical nature of the report to public works, as opposed to the human aspect.

"I think safety, particularly in the village of Lanark, must be a consideration of the public works committee," he stressed.

Cost is another consideration with the increased truck loads. In the public works report, it noted that the county, along with OMYA and Tomlinson, commissioned a traffic load evaluation study to de-termine the impact of increased loading in 1997.

That study concluded it would cost $410,000 in material to strengthen almost 40 km of road between Perth and the quarry along Cty. Rd. 511.

"A complete analysis of the effects and potential costs related to OMYA's proposals must be done and a cost allocation methodology must be developed," the public works committee concluded.